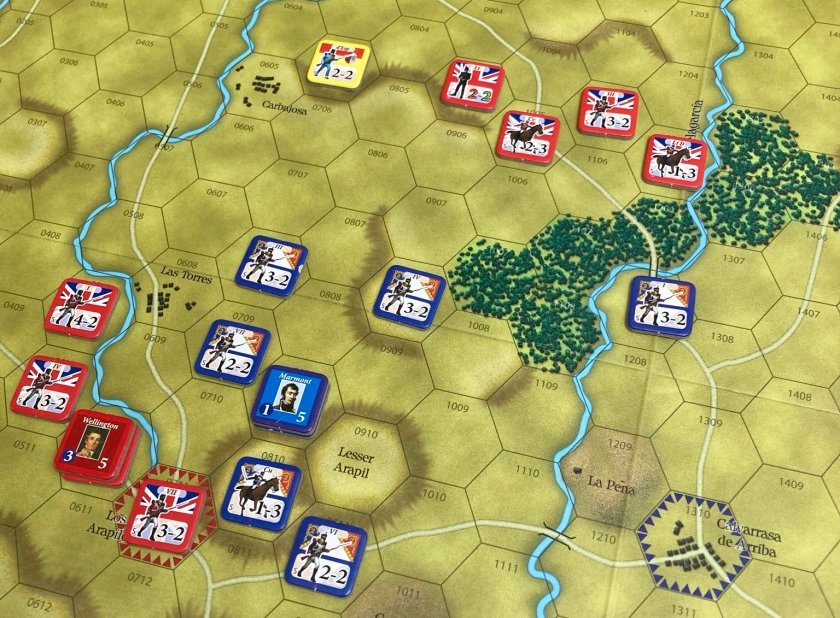 Picking up with the 4th scenario provided in the boxed edition of Fading Glory, I recreated the battle of Salamanca with a solo playthrough. Unlike the actual battle, this was not a decisive engagement but rather a grueling slugfest, where either side could not turn the enemy flanks and land a decisive blow.

No divisions were on the map the morning of July 22nd, 1812 but as the day drew on British and French divisions arrived from the north, traveling down parallel roads, the Pelagarcia and a dense forest separating the two forces.

Marmont split his forces in an attempt to cross the Pelagarcia in force and to push onto the high ground Wellington had anchored the British forces on. To meet these twin threats, Wellington also split his forces, maintaining relative parity between the two wings of the armies.

Despite several indecisive attacks, the French were able to expel the British from the Greater Arapil, thereby unhinging the entire British defensive line. Over the remainder of the day and into July 23rd, the two armies attacked and counterattacked with the British slowly losing ground, each sides’ morale dangerously sitting on the precipice.

The continued threat of the Armee du Nord falling on Wellington’s rear kept Spanish infantry and British cavalry disengaged from the primary contests.

After losing the high ground south of Salamanca, Wellington was forced into more desparate attacks on multiple fronts, presenting command issues for any units not within his command radius.

Eventually, late on the second day of fighting, British morale collapsed and Wellington was forced to quit the field resulting in a decisive victory for France. The battle could have swung in either direction but poorly coordinated and ineffective attacks turned the battlefield into a bloody slog.