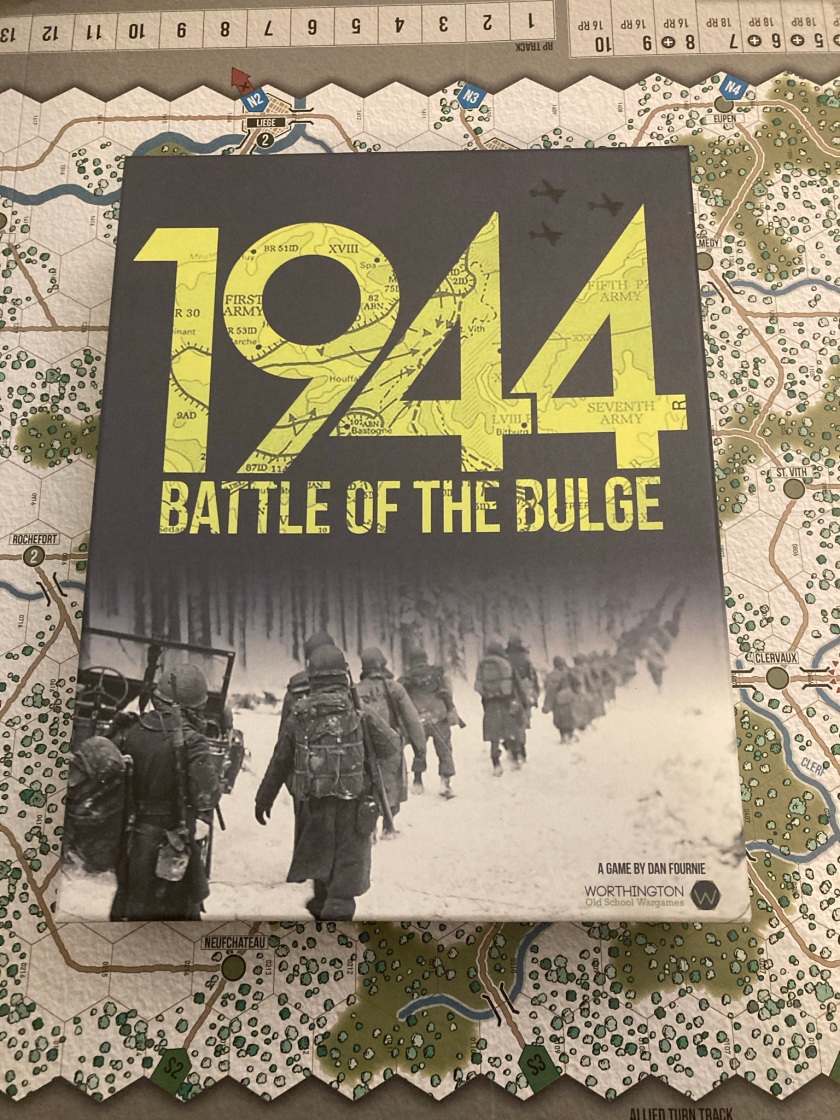 Another Bulge game you say? Fine by me considering it’s my first title on the famous battle (second if you count my unpunched copy of Ardennes ’44 on the shelf). But I do understand the fatigue. A cursory look on BGG shows a saturated deluge of Bulge games and there are a wealth of battles and campaigns from the Second World War that also deserve our attention.

So why consider Battle of the Bulge 1944?

If we want to start superficially, just look at these sumptuous components.

A mounted board. One-inch counters. Included counter tray too. This is a pretty as wargames get.

Not that there aren’t some interesting mechanisms at play here. Here are some of the highlights.

Each side is delegated an amount of resource points that are used to furnish replacements, move units, and attack hexes. This economy cannot support everything you’ll want to do in a turn, especially for the Germans. Time, fuel, and pitched battles are inimical to the drive to the Meuse. As attrition takes its toll and the terrain prevents freedom of movement, tough decisions must be made on what to spend those resource points on. This becomes even more important in relation to combat and movement.

Like block games, there is no combat results table to consult. Each unit provides a series of dice, each one with two results, an armored and infantry result. Armored results must be applied to any armor units, if none present, then the hit must be taken on an infantry. Terrain and supply conditions effect available dice.

Unlike many other games, there is no delineated attack or movement phase. Both can occur at any time if the requisite resource points are spent. The same unit cannot attack or move more than once each turn. For instance, a unit can attack a hex at the cost of one RP, eliminate a unit and then spend another RP to move into the hex. Conversely, a unit can spend an RP, close the distance with an enemy, and then spend another to attack. However, because there is no advancing after combat, the victorious unit cannot automatically take the vacated hex.

In fact, there are no forced retreats in the game, which feels a bit out of place. To fully eliminate units, its recommended to a mass units from multiple angles to ensure enough steps are lost on the targeted unit.

But the broader take away from this alternating ability to move and attack, is that turns must be well thought out. If you want to take a hex, you must leave an in-range unit in reserve to take the hex, if the enemy unit is eliminated. Along with the heavy terrain costs, much of your movement must be though out ahead of time. Just like in the real battle, traffic jams can kill your advance more than the enemy. Supply is also determined at the moment of combat or activation, so judicious movement.

Another twist are the variable victory conditions. The German player selects a victory condition card in secret before each game and keeps the objectives hidden throughout the duration of the game. In effect, the Allies do not know what specific game they are playing and have to inuit the German goals based on their movements. I’ve only played this solitaire and have not had the pleasure of playing in this manner, but it no doubt adds a degree of replayability and unpredictability to the gameplay.

These objectives range from getting in supply armored units off board edges, seizing towns and cities, and in one scenario, destroying Allied units.

And just like the battle, the onus of victory lies with Germans who are of course, on the offensive. Starting out, the more skilled player should play them. Without a good German game, there is not much of an offensive.

There are a few optional rules that lend more historical flavor- variable weather conditions and fuel shortages for the panzer divisions. Also, because airborne units are exempt for out of supply effects, you’ll more than likely park the 101st Airborne in Bastogne to hold that vital crossroads.

Historical leaders (Patton and Manteuffel) make an appearance and can give a much needed bonus to attack and movement in a pinch.

The game never feels scripted but has enough chrome and historicity to move you towards historical outcomes.

Minor quibbles include a few misspellings on the board and the American 106th is mislabeled on the reduced sides of its counters. But these a negligible and should not impact your enjoyment. The broader criticism or observation is that the dice results can swing wildly. Without a CRT to ground the range of results, it can be feat or famine when it comes to scoring hits. But that’s the nature of the combat system and on average I found the results in line with the theoretical odds.

Also, the inability to force a retreat is also a departure from many other hex and counter games, especially on this scale. It can lead to small units holding up entire advances, in combination with bad rolling, it can hamper the sense of realism.

But what I love the most about this game, despite not having played any other Bulge game, is how it captures the spirit of the historical campaign. An undermanned and underpowered American army must hold out against a superior German army in a series of delaying actions so that reinforcements can flood in from the north and south to stanch the bleeding. Each crossroads and town held against the Germans is invaluable time bought for the Allies. Much of the map is dominated by rough terrain, woods and rivers, making the use of roads critical for German success. Movement costs along roads is at fraction of the normal costs but moving though a friendly unit still slows down the advancing unit. Order of attack and movement is critical to avoid traffic jams and the bottlenecking of divisions.

With little rules overhead and streamlined concepts, the game successfully simulates the Battle of Bulge. I can see this being good introductory wargame for those new to the hobby.

War gaming, to be frank, can be an exhausting hobby. The will and discipline it takes to lay out a table sized map, sort hundreds of counters are not always in ample supply. On those days of little patience or low energy, its good to have games like Battle of the Bulge 1944 on hand. My gaming needs often oscillate based on complexity- after chewing on a fatty, rich, dense title, I just need a palate cleanser, something light and refreshing. Battle of the Bulge 1944 does exactly that.

Not that Battle of the Bulge 1944 won’t engage you or force you to make tough decisions. Maneuvering through rough terrain, balancing the distribution of resource points, and pushing towards objectives leave much to be considered.

In the end, it’s essentially a block game without the blocks and it offers a digestible, low complexity take on the classic Ardennes offensive that can be played in an evening, alone or with a partner. What’s not to like?

The third day of battle ends with McLaws, Heth and Pickett breaching the U.S. line on Cemetery Ridge. With both armies exhausted, the Confederates managed to edge out the United States with casualty VPs and are victorious.
Night falls on Gettysburg, July 2nd. Confederate victory is within reach, but the Union line is entrenched. A swing to the south could threaten and upend the Union line- only dawn will tell how this story ends.
July 2nd. The Union 1st Corps was caught in the open but held its ground and repulsed two brigades of Johnson’s division.
Final positions at the close of fighting on July 1st, 1863.
July 1st, it begins.
It’s that time of year.