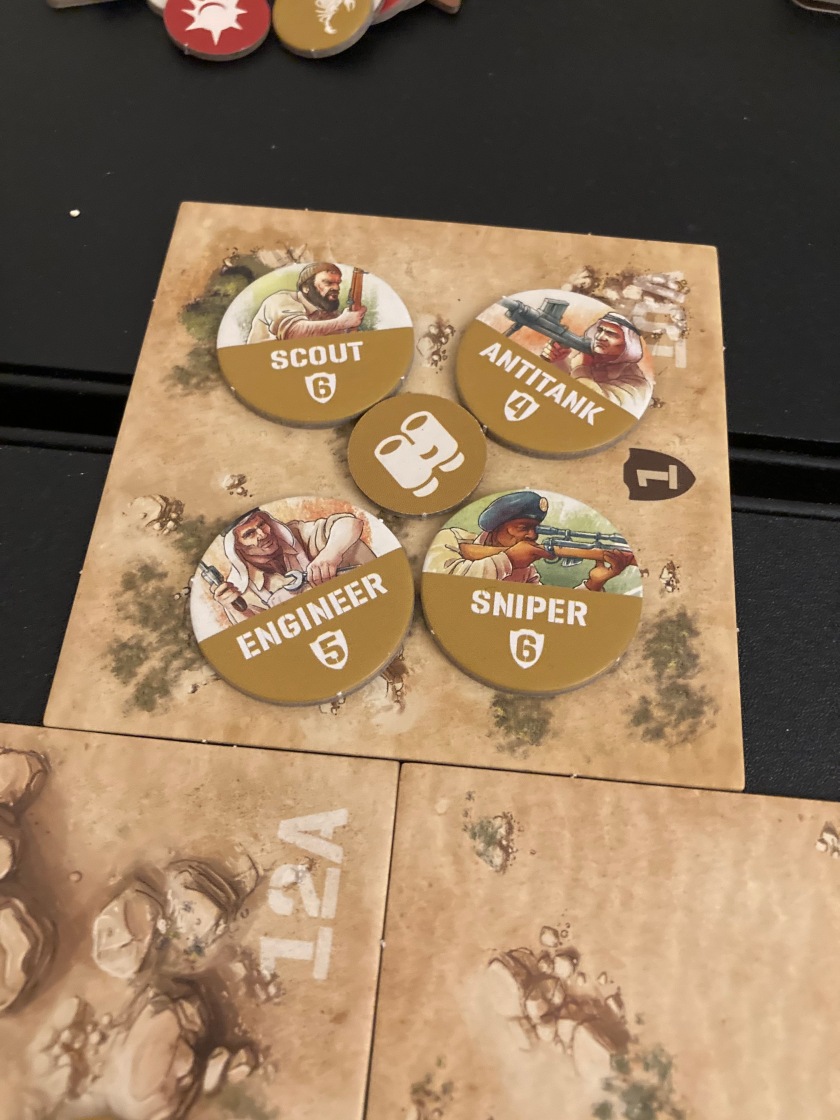 What a delight.  It took me five months to venture out of the house to a friend’s and finally play a game. And the game could not have been better. This is a far cry from the usual hex and counter affairs I solitaire- this is a vibrant, engaging endeavor that is deceptively simple and incredibly tense. Each game hung in the balance and once the dust has settled from an exploding airplane parked on a runway or an Italian tank rumbling over the last objective, you’ll be scrambling for another round.

Undaunted: North Africa is the perfect marriage of accessibility and depth, dressed up in a new and often unexplored facet of the Second World War, you guessed it, the North African campaign. Sequel to the highly acclaimed Undaunted: Normandy, North Africa pits two new factions against one another, The Long-Range Desert Group (LRDG), a covert operations unit of the British forces, and the Royal Italian Army.  Each have their own unique units and abilities, resulting in an asymmetrical experience wherein players will have to leverage different play styles to achieve victory. Broadly, gameplay consists of taking various actions with units across a customized board to control (Italians) or destroy (LRDG) objectives, although some scenarios require the destructions of specific units.

That’s it. Rinse. Repeat. Of course, the devil is in the details. The ease of access belies the breadth of choice and options as the tension that mounts.

Although the deck building element is light (there is little choice on the composition of your deck and within a few turns, you’ll have absorbed all your available cards), it drives initiative, unit activation and unit ‘hit points.’

Three types of cards comprise your deck: fog of war, units, and leaders.

Fog of war cards clog your deck and are added into it when additional terrain tiles are explored. Most units can only move (unless using the Stalk ability) into scouted tiles. As an action, certain units like the Scout can filter those out allowing you to cycle through your deck next. Unit cards activate the corresponding unit, allowing them to move, attack or otherwise interact with objectives. Leader cards have no corresponding units on the board, their actions allow you to add more unit cards into your deck or play another card that was previously played in your play area.

And combat is a dream. When either using the Attack or Suppress action, you add the innate defense factor of the unit you are targeting, the number of tiles between them, and the defense factor of the terrain of the defender. Roll the appropriate number of dice, if the result meets or exceeds the defense, a hit is scored. No combat results table or other combat figures to memorize. All the information is listed before you. Combat blends abstraction with speed, and it never feels cumbersome.

And when your men do take a wound, the blow is two-fold. Not only is he closer to bleeding out and having to leave the board, but for each action that results in hit, a card from your hand or deck must be removed. That means one less opportunity to activate that character, which can be extremely detrimental if he is crucial to achieving your objectives.

From the beginning, each turn is full of agonizing decisions. Do you dash ahead and scout, thereby paving the way for the others to move forward but take on useless fog of war cards? Use a leader card to activate another unit or bolster your deck with more cards to boost health and opportunities to activate. Suppress or attack? Split your forces or focus on one objective one at a time? These ambitions are complicated with different objectives: having to specific units, escaping the map in a mad dash in a patrol truck, or taking a tank on with out any vehicle support. It’s a wild ride.

Undaunted: North Africa is intuitive, easy to lean and surprisingly rewarding. By no means a simulation, it does give you the nail-biting tension of man to man action deep in the desert with absolutely no rules overhead. Buy it. Soon.

Buy it: if you have any interest in a simple yet rewarding ‘war’ game, for Undaunted can be enjoyed by novices and grognards alike.

Avoid it: if you can’t enjoy any ‘war’ game light on complexity and rules overhead or a looking for another plausible solitary game to add to your collection.