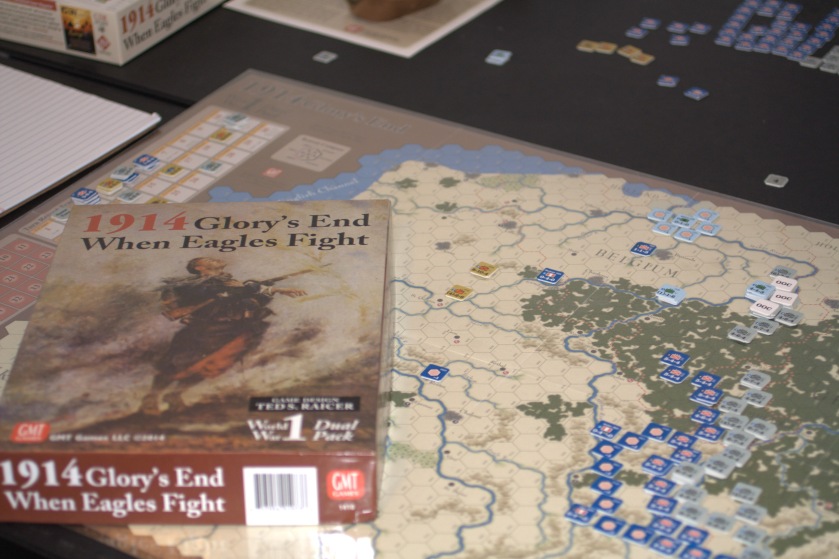 The aptly named Glory’s End is an operational level game focusing on the opening months of the First World War on the Western Front. Designed by Ted Raicer and previously released as a magazine game in the ‘90s, the box set also includes another one of his designs from that time frame When Eagles Fight. Released in 2014, I procured this copy a few years ago and finally have gotten around to cracking it open.

Anyone familiar with Tuchman’s The Guns of August will have an easy grasp on the first six or seven turns of the game. Pursuant to the Schlieffen Plan, the right arm of the German army plans to hook through Belgium and sweep over the open terrain of northern France, flanking Paris and sweeping down the front.

The French, certainly not content to sit idle and anxious to avenge the humiliation of 1870, are looking to advance along the Frontiers and push into Germany. Like a giant spinning wheel, the opposing plans are aimed straight at the other sides’ weaknesses.

There are individual rules governing these respective plans- the Germans can extend their movement allowances for corps that have crossed the Meuse and they have siege guns that can crack open the Belgian forts. The French are penalized via victory points if they do not launch eligible attacks into Germany preventing any player from withdrawing and predictably moving against

But this is only half the game. After Turn 10, entrenchments enter the fray. And thus, begins the race to the sea. If this has happened, i.e. no one has won outright, then it becomes a scramble to construct a solid line of trenches and secure the channel ports. This takes us to early November 1914 and historically to the end of the First Battle of Ypres.

Given that the game ends on the precipice of winter, how does one win? By accumulating victory points.

Generally, these are gained by seizing cities and towns. These geographic locations often are awarded exclusively, with only Lille being counted for points for both Germany and the allies. As one side gains points, the other does not necessarily lose. But seizure of certain areas can deny the other side victory.

Victory is checked at the end of every player turn (there is no unified, mutual check until the very end of the game.) So it is possible, for either side to seize their objectives and win before a counterattack can be launched. Proactive planning is key to prevent this.

If the Germans seize Paris, it’s over.

If the Allies take Saarbrucken and Strasbourg, it’s over.

But if neither of these come to pass but Paris was threatened (designated by a large orange perimeter) but not taken, then the conditional victory hexes are activated. It’s a genius and simple mechanism to inject new life into the campaigns as new objectives become pertinent on the map and the mad scramble to the sea can begin.

Unit sizes range from divisions to corps, rated for attack, defense and movement. Hexes cover about 10 miles and the turns are three to four days long. Turn phases cover reinforcements, replacements, strategic movement by rail (not depicted on the map- basically you can move from town to town at will), command control, movement/march assaults, and prepared assaults.

Let’s break these down those last ones a bit.

The command control phase essentially assumes all your units are under command able to receive orders the vast majority of the time- but, you still must roll once a turn and on a 6 your opponent can place 3 out-of-command tokens (OOC) on any three stacks that virtually render them useless. Statistically it will not happen often, but in my playthrough Germany rolled two separate sixes on back to back turns and of course I had the Allied player place them on stacks of the First Army. Talk about a hold up at Liege! This held the German advance in check, with no Allied casualties and completely upended the German order of battle. In fact, the consistent OOC rolls that Germany failed impinged crucial advances three separate times. This produced a drastically different game from what historically transpired and I was all the more happy for it.

Having a passing familiarity with the opening weeks of the campaign, there are several rules that bring a lot of historicity and reflect the realities on the ground that drove so many decisions.

The largest criticism I could lodge towards the game would be the considerably abstract supply rules. Raicer has removed rail lines from the map, arguing that supply lines by rail were so abundant that any hex unimpeded by the enemy can be used to trace a line of supply. This makes true encirclement or even the danger of a threatened supply line non-existent. Several times through my playthrough, several corps would be cut, but because the surrounding lines were not airtight, supplies could be funneled in by skirting around the lines. This led to wild situation where LOS was being supplied by a completely different route, through enemy territory, snaking right by enemy units. In this instant, it felt broken.

This makes me wish, as in his other game When Eagles Fight, that there was some sort of ZOC rule or interdiction of supply. Without it, the supply rules are far too generous and does not reward careful stewardship of your lines of communication.

Initially I assumed the LOS rules mirrored those in When Eagles Fight, wherein your LOS extends only five hexes from an in supply town or city hex. This town/city hex could only be in suppy if itself was within five hexes of another in supply town- this is repeated down the line until a LOS cn be traced all the way to the respective powers capital/ hexside. This prevented wide circumventions of battle lines.

Perhaps this will be introduced into the Glory’s End rules in future playthroughs as a house rule.

In addition to the main campaign, there is a Free Setup scenario and a smaller Battle of the Marne, neither of which I played. I spent about 10 hours with the game, playing solitaire of course, (there’s a pandemic on!) I would have continued but I called it quits when an errant gust of wind scattered more counters than I cared to painstakingly put back into place.

The rules are simple and relatively straight forward, there is minimal rules overhead but there were a few cases and exceptions that I missed throughout the playthrough (OOC roles, automatic step reduction when assaulting a fort to name two). Multiple playthroughs and another set of eyes would no doubt cut down on these instances. But this is the nature of the lonely solitaire path. The shifting objectives provides a loose script that organically mirrors the objectives of both the Germans and the Allies and provides a contingent narrative should Paris fall out of reach for the invaders. The step reduction is granular enough to show the slow degradation and erosion of forces over the course of many weeks of fighting. Even after taking three step losses, a small and effectively shattered corps can still prove useful, especially when the defense grows more desperate.  The inclusion of trenches and their organic rules is a delight. It demonstrates the end of mobile warfare and the slow, digging in as armies try to outflank one another heading to the coast. The narrowing of scope and the race to the sea is an accurate mirror to conflict as it played out in 1914.

With a minor house rule to tighten up the supply rules, this is a simple and effective game recreating the first fate months of the Western Front in 1914 and something I look forward to returning to.